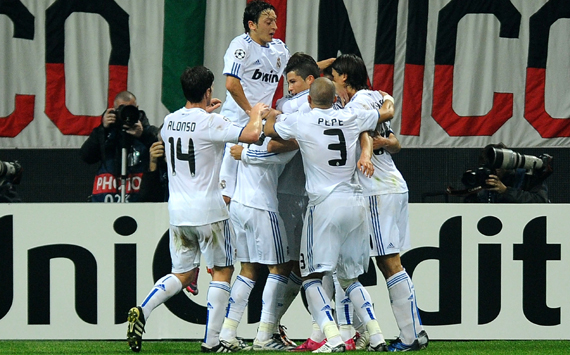 The Madrid again became a man team and meet the expectations generated against Milan at San Siro in a game that was far superior to the Rossoneri, and they went crazy with three goals in the last twenty minutes. Higuain scored first after a great pass from Di Maria on the edge of the break, but despite the overwhelming dominance merengue, Inzaghi turned the scoring ten minutes from time. The first came after a series of failures in the defense of Madrid, and the second after a scandal out of the game that Howard Webb awarded a very permissive. The referee allowed the entire game jugase Milan eleven and she was very much alive until a minute before the final. Pedro Leon Because some justice back to score in injury time after a great pass from Benzema achieving a tie for the final two stops ‘discontent’ at Madrid after exhibited in the field. And that is the San Siro curse is still alive after this power game.
Only two minutes it took to make the first shot. It was the Real Madrid Higuain shot that Abbiati did stretch the muscles. Unequivocal sign of what was coming next: a power game, with many arrivals to both goals, heat, physical contact, with details of quality, of comings and goings, with emotion … a great match in any order. Complying with the poster on the other.

And it was the better Real Madrid that began in San Siro. The white set also proved far superior to Milan at the beginning. Infinitely superior. Returning to strike a blow at the table with half of Europe on the other side of the TV. And with the added value of all arms Rossoneri had not lowered as in the Bernabeu. But despite the desire of Milan, first half of the first part was outrageously colored merengue, with up to three times between the striker best white rule. The first of Di Maria, who missed a counter (no penalty whistled after Zambrotta) throwing the ball to the strain of the post after two cuts in the area when local barreled single goal. And the next two Higuain’s head and of the Di Maria in a volley, both repelled at the goal line by Pirlo.

However, the visitor domain resulted in goals, making good the expression of the curse of San Siro. And Milan, until the minute he did not know twenty-five rid of the suffocating pressure of Madrid, is stretched. The ball, usually by air, it spent almost by Boateng, Pirlo and Gattuso, but there was no need to create danger, because Ibra, Ronaldinho (ever closer to a simple street juggler than an elite footballer) and Duck were sufficient alone every time they caught the ball or connecting one of the many band changes, putting the tension and excitement at the meeting. So, Casillas stopped a hand in hand with Ibrahimovic, and subsequently sent out a Vaseline Swedish goalkeeper with meringue and grapes on the edge of the area.

Two cases that were not due to a domain rossonero far, but to a more open game than the beginning, with alternating times. And in this alternation, Di Maria took the justice to the marker in the beginning of the rest. The Argentine after a gallop by the band, put on his wizard suit and, when it seemed he was going to shoot, they conjured up a deep pass to Guti style to Higuain. The resolved Pipita sobriety from inside the box putting the Madrid ahead and entering pass in the book of honor merengue, when 700 of the Real goal in the history of the European Cup.

After passing through the dressing rooms, the Madrid retained possession of the game against a Milan diminished, looking for the goal with balls and just lashes base perhaps more driven by the public than their own possibilities. However, the justices do not know football, and after an hour in defense really spotless, the curse of San Siro again made his appearance against Madrid. Seventy first round. Pepe failed to clear a ball, Ibrahimovic picked up the leather and then was Casillas who missed the middle of Sweden. The goal was to find the center and had to correct in mid-air, play the ball and he did not head for a goal Inzaghi, certifying the tie. Was virtually the only mistake in defense of Madrid tactically perfect, but the law of the goals stated that both teams were at par.

And beyond that, ten minutes later, Howard Webb decided they could not be matched, but the Milan would be on top. Because if not, it is understood that no decree out of play when Inzaghi was three meters! ahead of the defense merengue. The Italian striker, who revolutionized the game with its entry into the sixties, took the forward position to stand in front of Casillas and beat him in hand to hand putting the Rossoneri ahead on the scoreboard. Football unfairly, yes. And helped by the referee, too. Well beyond the local goal, the referee also pardoned several cards to players like Inzaghi milanistas, Abate, or Gattuso. Overly permissive action also prompted the Milan lose all the time in the world until the end of the meeting.

However, football still a surprise in store. And, in addition, Pedro Leon won the tie after a shot from inside the area in deep pass from Benzema. Two cases punished who rescued a point for Madrid at the buzzer. A sweet spot because he knows how he had put the game at the end of it, but totally unfair how he developed the game mostly. It was the day to end the curse, but there was someone who did not understand this … and this time lady luck was not the almighty football.