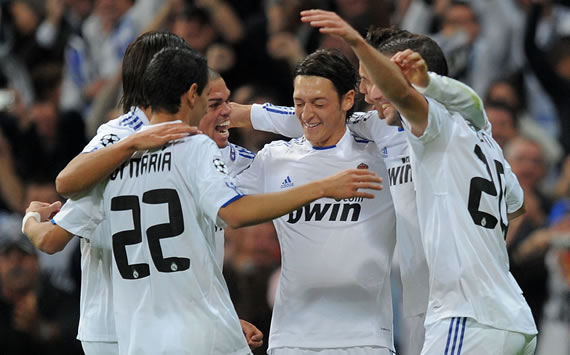 Real claims a righteous vengeance against Milan and entrains the classification to the next phase after a 2-0 defeat clearly to all Italian. The white team took advantage of two goals from Ronaldo and early bird Özil in separate rulings rossonera behind, and was superior to Milan for almost the entire match. In the first half for Milan took control of the ball during a stretch where Pirlo and Seedorf could draw, but on aggregate was beaten physically and tactically by a mother who was able to create danger from an immaculate defensive network.

If the party par excellence of the Champions League had been raised in madridistas circles as the first serious test of the Madrid, what happened to white set-sufficiency. What’s more, because if this particular test had lasted fifteen minutes, would have drawn a distinction. And in just fifteen minutes went two goals ahead. That could be three if the referee had a clear penalty enacted on an electric Gattuso Ronaldo ahead moments after the score 2-0.

Milan came out with a clear idea of defense with seven players, leaving the responsibility for goal only to Trident Ibra-Pato-Ronaldinho. A formula that first made waters. First, because Madrid was disabled with a pressure almost perfect in all its lines, with a great physical waste almost all their players. And second, because two defensive errors, Madrid went ahead soon. The first came with the signing of Ronaldo free-kick to open the barrier rossonera (minute 11). And the second, Özil two minutes later on a shot from the front that deflected off Bonera and slipped into the goal of Amelia and lining up the party for meringues.

Milan then had to leave the mess that led to trot then, and they cherish the quality midfield forward, took out the claws and the game opened up inevitably being distributed and ball control. While Pirlo and Seedorf free-kick took the tie to his boots midway through the first part. But on the first occasion Casillas, making a picture stretched Pulitzer, and second, the sight diverted Seedorf, were key to the Madrid continue ahead on the scoreboard.

A Madrid despite the visitors twice, and that the meeting came to an electrical phase, not frayed as before. Merit should be attributed to Mourinho allegedly. He stood his ground, suffering a little more on defense, but with a willingness on the green and even sometimes to extend the lead. Thus, in the last ten minutes before the break Ronaldo (determinant as always), Di María twice and could alienate a ubiquitous Özil Madrid in the mail, the most obvious being that of Argentina, who failed to complete a five-counter only two red and black against white.

The scoreboard did not move and more before the break, and passage through the locker room helped the entire party will fall in the second half, perhaps caused by fatigue of the Rossoneri. The Madrid yes, remained with the same physical deployment in defense, and now with total control of the ball still had time to distance. But not a gentle header Higuain or jugadón Ronaldo after a superlative Marcelo, Pepe and the decline of a lack of Ronaldo were fortunate to face a door.

Allegri attempted to retake the pulse input to the game with the feared Inzaghi and a Robinho booed by the Bernabeu. And so, Ibrahimovic had a shot on goal that drew the defense to ten finish, and Robinho took a shot that Casillas. But Milan had long outside the meeting, which was impossible to reverse the dynamic of the meeting. The lord and master on the scoreboard and the field had been a Madrid that entrains the qualifying round, and after some time, gives a blow on the table by beating a clearly biggest in Europe.