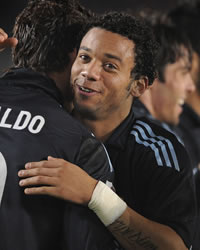 The consolidated Madrid against Racing league lead in the best way possible: with the third goals in the last four games. This time there were six goals that fell from the white side, which after seen in recent weeks and seems to have caught the cruising speed and has become little more than a bulldozer. And the command of it today was put back a Ronaldo who scored no less than four goals. That itself was not the only one who pulled the cart, it is necessary to emphasize again the attitude and empathy of the entire Real Madrid team from first to last, featuring a Di Maria scored but not directly involved in four points, certifying than expected.

Because after thrashing Deportivo and Manchester, and dance around a giant like Milan, the most normal thing that Real Madrid was riddled with an arriving Racing Santander at the Bernabeu low hours and just under your skin and sold beforehand. And although football is not governed precisely by the rules of three, this time the equation gave the expected result: a superlative Real Madrid Racing impotent beating people.

Not surprisingly, when only one quarter had played the game, the electronic white coliseum and exhibited a 3-0 certainly reflects what we saw on the field. That is, a Real Madrid just plugged that if he were facing the Milan and was literally tearing at the table Cantabria. First, with a suffocating pressure of men out of Portugal did not know if it was based on inaccurate balls, and held for virtually the entire game. And then, with a power attack with players almost always play the first tap combinations, but always found today also addressed in long balls. An action that seemed much less chance of the other party, and became useless the initial defense of five of Racing, if intended to be wall, now forget the bricks and mortar.

Thus, the first goal came quickly. It was in the ninth minute when Higuain solved a heads up after changing a prodigious band sublime Di Maria today. Five minutes later, it was Ronaldo who certified it 2-0 on the scoreboard after another deep ball to an effective Higuain. The cross Pipita first touch for the Luso-ahead whole-topped racinguista defense in front of goal.

And far from satisfied, the white players followed with the festival of football, and after Di Maria giving a truant and a Chilean at the viewer, Ronaldo scored again at minute twenty-six of the party in a move very similar to the second goal . This time it was Di Maria who attended Özil depth, so that the Germanic focus from the band to a Ronaldo who was in the style popcorn Salinas, and scored at will.

This led to the break, and after the impasse, Portugal has chosen to remove a defense to bring Ariel in the lead, but gave no fruit. Moreover, ten minutes after the restart the Madrid had reached the little hand and Ronaldo had already added two more goals to his tally to score four in total! The Luso marked the fourth of Madrid to finish off a cross from the right of the ubiquitous Di Maria. And also the following noodles served on a plate to force a penalty committed by Schism. The ‘7 ‘White decided from the spot, certifying his eleventh goal in the last six games, reflecting the state so that in turn passes the white team.

At the party striker Di Maria, Higuain and Ronaldo slipped shortly after missing the aces repóquer merengue: Özil. The German took a deep pass from Xavi to beat in the hand by hand and sign an overwhelming Toño 6-0 on the scoreboard. Time when, with almost half an hour still to go, Mourinho gave Channels minute, Benzema and Pedro León. Former racinguista and today too indolent French striker had in his boots to further expand the scoreboard, but it was Racing who scored the honor in his locker after he deflected a long shot Rosenberg Diop. A far as the festival marred lived in the Santiago Bernabeu Madrid sweeping a hand in a short time and has earned respect in Europe and Spain-based games like tonight.