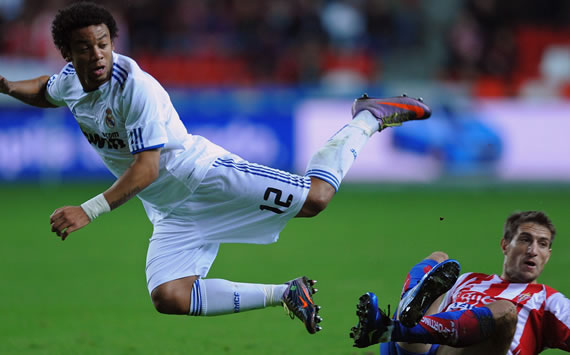 The Real Madrid comes alive in a real battle in the Molinón and maintains his lead in the league in extremis. Preciado egged on his men and the fans to beat the ‘villainous’ white set, and their tactics worked. Sporting played to 200%, raised a very awkward match the white-sometimes even hard-steal and nearly two points to Mourinho’s men had it not be because Higuain went very ready to take Juan failure Paul just seven minutes from time. Until then, the roles of hero and villain were exchanged between them, with the Atletico goalkeeper stopped having a face to face with a resounding and Higuain before a ball had hit the crossbar. Two of the few times in a terribly inaccurate and tense encounter.

For if already a match between Sporting Lisbon and Real Madrid have enough hearth in Spain after apparently tonight at The Molinón, from now clashes between meringues and Atletico will be one of the hottest possible in our country. And after the controversy that arose this week between Mourinho Preciado and ignited the minds of all involved, this exchange of accusations has translated on the lawn in a locked meeting, contentious, tense, warm, and physical. An encounter that can make a chronic rivalry between the teams from here on out by the tension that has occurred between them. A meeting where Turienzo Alvarez has gone through the center of attention of the fans and the twenty-two players, more concerned about winning favor now that put goal in the opposing goal.

After three minutes, Ronaldo had made three mistakes, fifteen of the Tier Molinón had sung the popular “So to win the Madrid”, the rest were carried and four cautions and a penalty claimed by local Carvalho on Diego Castro, and before the end there was still time to argue over a disallowed goal by Higuain was very very fair game, as well as the expulsion of Botía in the last action of the party. Sufficient samples to clarify the fate of this game locked. A party that served to demonstrate that Sporting did not come up with one of the largest in the league, and that at times seemed only to prolong the pre-tense.

And why in the first quarter of an hour, Madrid seemed very settled and slightly off. Therefore, Higuain came to finish off the bat in the ninth minute and took a shot Botía Di Maria almost point-blank from the balcony of the small area just four minutes later. But with the passage of minutes, the Madrid was swept away by the momentum of Atletico, who had their clearest chance before the break at the foot of a enchufadísimo Diego Castro, whose shot from inside the area met with Pepe. Only three times in total in the first forty-five minutes. Few. Less than even warnings.

And over the locker room did not work this time to cool tempers. For the second part was so tense, so hot and so vague as the first half. But yes, Real Madrid was closer to the goal. And if not managed by the minute eighty-three was only because John Paul was erected in the hero from the battalion rojiblanco. The local keeper took out spectacularly a cross shot to Di Maria, saved a resounding hand in hand with Higuain, and if not enough, cleared a shot from Benzema who sneaked inside.

Yes, the line between good and evil is very thin, the difference between heaven and hell may be minimal, and John Paul found himself in his own flesh. For if the Madrid emerged alive from the battle of El Molinón was largely because the Atletico goal not saved a tame header from Benzema, leaving the ball dead to finish off a goal Higuain unopposed just seven minutes from time. Barral had in his head the equalizer a minute after the Madrid hasten it, but this time Casillas did respond catlike, closing the final victory for the white set. A Madrid who has lived in Gijón one of the most difficult tests on their way to keep the League lead.